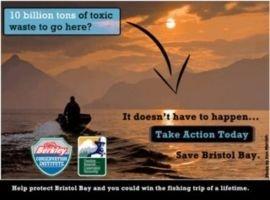 The time is now to tell the EPA to act upon its scientifically sound watershed assessment showing Bristol Bay salmon are at grave risk if Pebble Mine is allowed to proceed.

Pebble would be the largest open pit mine in North America and would create up to 10.8 billion tons of waste containing heavy metal toxins known to destroy salmon spawning and rearing habitat.

Southwest Alaska's remarkable web of abundant wildlife, including salmon, bears, moose, wolves and migratory waterfowl, is in serious jeopardy – along with one of the nation's foremost sporting destinations.

Take a stand for Alaska's greatest fish and wildlife habitats and you'll be entered to win a trip for two to Crystal Creek Lodge in Bristol Bay.