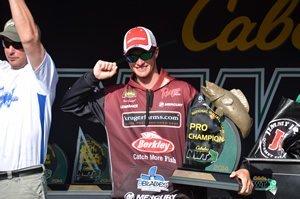 In the walleye world, there is no bigger event than the Cabela's National Walleye Tour (NWT) Championship that made a stopped in Oshkosh, Wis., this past weekend. Young Berkley pro Korey Sprengel showed up in a big way, winning his first NWT Championship title with a final two-day weight of 43.69 pounds. With bonuses installed, the Wisconsin native tallied an $84,424 payout.

"The gear I used was critical for this win," said Sprengel. "I was fishing some pretty snaggy stuff so the line was key. I used 10-pound Berkley FireLine Flame Green because I needed to see those subtle bites. The baits used were a one-two punch with a Berkley Flicker Shad size 7 with the bigger bites coming off a Berkley PowerBait blue fleck/pearl Rib Worm. I tied the Rib Worm on an 1/8th ounce jig and casted it out and let it sink to the bottom. Once it was on the bottom, I just shook the rod tip and the big walleye would just pick it up and go with it."

The win isn't something abnormal for the pro. Even at a young age, the Berkley pro has enjoyed success on a few different walleye circuits.

"Winning never gets old, but this one means the world," said Sprengel. "The weather conditions really can play tricks on a fishing area. It seemed like a grind with high winds and bites few and far between. The area I focused on didn't get blown out, but the real danger was what lies below the surface. The rocks and junk down there are pretty gnarly so I am thankful for tough lines like Berkley FireLine because I also have the ability to feel the most subtle bites and when I hook up I don't worry about line giving out."