Michael Iaconelli knows how to finish off a field. He displayed his toughness this past weekend on the Delaware River. The Berkley pro didn't back down from a lackluster first day. He finished the rest of the B.A.S.S. Elite Series field off in grand fashion with a winning weight of 47 pounds, 14 ounces. That is eight pounds more than the nearest competitor.

For his effort, Ike once again captured the fighting spirit of Philadelphia and a nice payout of $100,000 and an instant qualification to the 2015 Bassmaster Classic.

"This is a great feeling to know the Classic is sewn up. Having a Classic berth is a very important thing," said Iaconelli, who would have had an uphill climb to clinch an entry into the world championship through points earned at each event."

Ike has eight Bassmaster wins on his pro resume, which includes another Elite trophy on Alabama's Lake Guntersville in 2006.

Iaconelli, the only angler in the event to turn in four five-bass limits, said he caught most of his bass — all largemouth — on two lures. One was a 1/2-ounce, small-profile finesse jig, tipped with a high-action Berkley Chigger Chunk in green pumpkin. The other key bait was a Berkley Havoc Pit Boss in Okeechobee craw.

"Small profile baits are key on the Delaware," said Iaconelli. "It has been that way forever. I'd say the Chigger Chunk is one of the most underutilized jig trailers out there. I see a bunch of guys biting off the Chigger Craws, but the Chigger Chunk is designed to perfectly fit jigs. I don't have to bite anything off to get the action I need."

For fishing gnarly cover, Ike was using Berkley 20lb. 100% Fluorocarbon. Ike stated, "A few of the areas that I'm fishing are so nasty. Each day, there have been three or four fish that I'm amazed I got out of the cover and in the boat. I can't tell you how many times I've had fish hung up in cover and eventually worked them out. My line has been frayed, but it's held every time and hasn't broken. It's really impressive."

The next stop for the Elite Series is Aug. 21-24 at Cayuga Lake out of Union Springs, N.Y. The event, the A.R.E. Truck Caps Bassmaster Elite at Cayuga Lake, will be the final full-field event of the season. 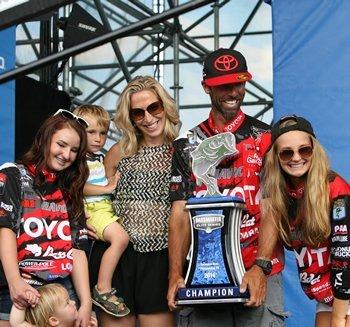