The mating process of the largemouth bass has certainly been studied by anglers far more than the spawning cycle of any other fish. Serious bass anglers await it with great anticipation, knowing there’s no other time of the year when big female bass will be so accessible and so vulnerable.

But the spawn is far from an exact science, despite the cumulative angling lives spent observing it. After all, bass are individuals, and individuals sometimes do things differently … even when nature is calling the shots.

Let’s start with some useful generalities. First, not all bass in the same body of water spawn at the same time. Think of the spawn like a bell curve. At the left side of the “bell,” just a few bass are involved. As the season progresses, more and more bass will be nesting. Then, the spawn peaks at the height of the curve. After the highest part of the curve has passed, spawning numbers dwindle again on the right side.

The length of time between the first spawners and the last spawners on any body of water depends mostly on latitude. In South Florida, that bell curve may cover six months, generally starting in December and ending in April or May. As you move north, the period is compressed. By the time you reach the Canadian border, the entire spawn typically takes place in just a week or two.

Lengthening daylight hours are also extremely influential. As days grow longer, male and female bass undergo biological changes that drive the spawning urge, including the production of eggs and milt.

Moon phase is another part of the spawning equation, but not all bass hurry to build their nests around the full moon. Some spawn during the new moon and many seem to have absolutely no idea what phase of the moon they’re in when they go to the beds.

Now that we’ve narrowed the period during which bass spawn — at least a little — let’s take a look at where it happens. Speaking strictly about largemouth bass here, they’ll seek out areas with a hard bottom in protected bays and coves. The hard bottom is important because the bass’ eggs could sink into a soft, mucky bottom, preventing them from getting the sun and warmth they need to incubate and hatch. Sand is an ideal spawning surface, but the bass is adaptable, and the male may make his nest over clay or gravel or whatever else is available … as long as he can keep it clean by fanning it with his tail.

In extreme situations where a hard substrate is hard to come by, female largemouths have been known to spawn on stumps or the stems of vegetation like lily pads. It’s not the Ritz Carlton Honeymoon Suite, but it’ll do in a pinch. 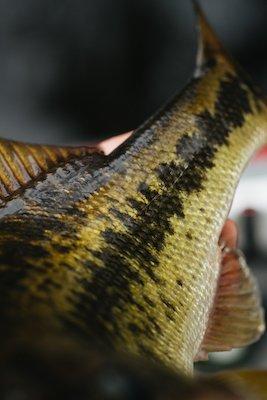 The depth of a bass bed is generally dependent upon water clarity and upon how early in the spawning season you’re looking for bedding fish. The clearer the water, the deeper the beds since sunlight can penetrate further to warm the eggs. But it’s also true that the earlier in the season you find a bed, the shallower it’s likely to be because shallow water warms fastest. Late bedding bass are often the deepest spawners of all.

All other things being equal, the first nests of the spawning season will appear in the northwest portion of your fishery. That’s because the spring sun strikes that area most directly and warms it first. Conversely, the southeast shores warm slowest, and bass in those areas will generally be the last to spawn. On a body of water of several thousand acres, an angler could conceivably follow the spawn around the lake for a couple of weeks or more, keeping a close eye on the temperature gauge and looking for evidence of bedding fish.

After the male prepares the nest by fanning it with his tail — often working until his tail is bloody and disfigured — he’ll try to herd his female of choice onto the spot. Some anglers believe the size of the nest is an indication of the size of the female, but since the courtship ritual is uncertain, so is that rule of thumb. 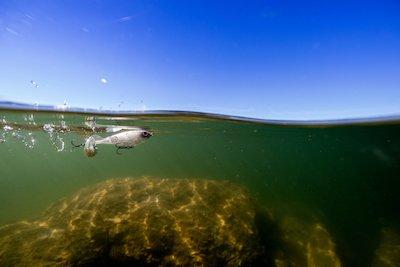 Once nudged toward the nest, an amenable female will deposit several hundred to many thousand eggs on the bed, and the male will fertilize them with his milt. The female may lay her eggs across several nests with several different males, but the male is generally committed to one nest and, after the female is finished, he guards it with a zeal seen only in nature.

The female may stand guard as well, but she’s generally not as closely tethered to the nest as the male and may only dart in when she sees that the male is in jeopardy of losing the nest to marauders like bluegills, salamanders, turtles, wading and diving birds and other predators. A day or two after she’s finished laying her eggs, the female is often gone from the nest area and trying to recuperate from the rigorous process. At this time, you may see spent females swimming listlessly near the bedding area and struggling to regain their equilibrium.

The period two or three days before the actual spawn until the female leaves the nest provides the single greatest opportunity for an angler to catch the fish of a lifetime. Big bass are shallow, aggressive and often impervious to the close proximity of boats and anglers. It’s a great time to cover water with a noisy and ire-inspiring topwater like the Berkley Choppo, Spin Rocket, Drift Walker or HighJacker. The Choppo, with its hard plastic, plopping-style tail, creates a lot of surface disturbance at any speed. You can fish it fast and steady like a buzzbait, but it’s often better on a stop-and-go retrieve.

The Spin Rocket mimics an injured baitfish, and its cupped plastic propellers spin at the slightest twitch. This makes it ideal when bass want maximum action in a confined space, like holes in vegetation or tight spawning pockets. 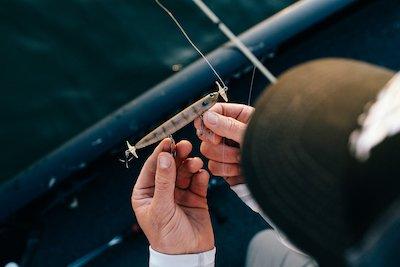 And when the bass are active on top but require some finesse, the Drift Walker is a great choice. It’s a walking bait with a small profile — perfect in calm water. Just cast it out and let the ripples disappear before twitching it to life. The zig-zag action calls bass to it.

For anglers just learning the ropes of the walk-the-dog retrieve, the HighJacker is their best choice. It casts like a bullet and is the easiest bait on the market to “walk.” It’s ideal for both seasoned anglers and those who are new to the technique.

If bass ignore the lures on top — or just slap at them — try the Berkley SPY. It offers a more finesse presentation, and the underwater props are often just what’s needed to get action. Try it on light spinning gear and 6- to 8-pound test Berkley Trilene 100% Fluorocarbon. The SPY comes in two sink rates, and the slow fall version is generally best when fish are shallow and in spawning mode. A slow, steady retrieve triggers a subtle, rolling action in the bait that draws strikes from finicky spawners. 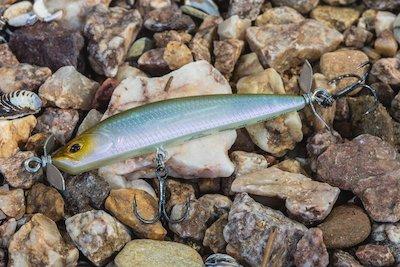 Once the fish are “on” the beds and focused on the act of spawning, you’ll likely need to change your approach to one that irritates or aggravates the bass into striking. That’s when a Texas-rigged soft plastic creature or lizard is best.

A lot of anglers will opt for a large bait, thinking it will better fire up the protective instincts of the bass. That may be true, but a big bait with a lot of appendages is easy for a bass to grab and remove from the nest without ever getting the hook in its mouth.

Never forget that these bass are not particularly interested in feeding. They’re guarding a nest from predators, and if they can scare away the threat without striking or eating it, that’s what they’ll do. They will sometimes inhale a bluegill or salamander, but only long enough to swim away from the nest and expel it.

This is the ideal time to rig up a PowerBait Mantis Bug, PowerBait Jester or PowerBait MaxScent Lizard. PowerBait is a proprietary flavor attractant that’s been lab-tested and proven in the field. It is fish’s flavor of choice and give anglers more time to set the hook because fish hold on 18 times longer than they do to unscented baits. 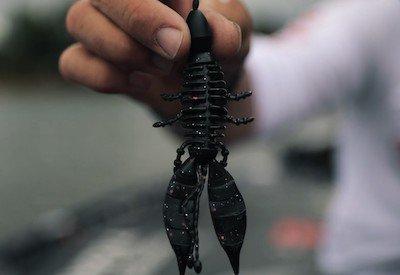 PowerBait MaxScent is Berkley’s latest enhancement to the PowerBait formula. Baits infused with it catch lots more fish than those without. It features a water-absorbent PVC formula that soaks up and releases a super-charged scent field which makes its shapes ideal for finesse style fishing. The combination of the scent release technology and the same great Original PowerBait taste make PowerBait MaxScent a double threat to bass! The soft and durable material has an ultra-realistic texture, comes in natural matte colors and won’t dry out like other scent-emitting baits.

PowerBait and PowerBait MaxScent can play an important role in triggering strikes during the spawn, but they’re even more valuable in getting fish to hang on long enough to set the hook!

Put the Mantis Bug, Jester or Lizard right in the nest and crawl them slowly through. When you can see the bass paying rapt attention, you know you’re in the sweet spot.

Just remember that if you can see the nest and the bass, the bass can see you, and that might drive them away for a while. Best to make note of the location, back off and cast from a distance. It’s often the difference between a lunker and nothing at all.

Absent a devastating cold front that could kill all the eggs in a nest, the eggs will hatch in two to five days, and the male will stay with the fry, guarding them and pushing them to an area with brush, vegetation or other cover where they’ll be somewhat protected from predators. By this time, the male may have gone two weeks or more without eating. He’s understandably ravenous and may even turn on his brood as a food source.

This is the time to target the males with a bait that can be cast or skipped into shallow cover. A weightless PowerBait MaxScent The General in green pumpkin is the perfect choice. Just cast to the cover and let the unweighted bait fall. The General does the rest. On top of its wafting, wiggling action, the PowerBait flavor and MaxScent scent release is too much for a hungry male to resist.

A final note on fishing during the spawn is that catch-and-release is vitally important. A bass caught off a bed will usually return to the bed and its duties if released immediately in the same area.