The Right Line: Easier Than You Think

Once upon a time, many decades ago, anglers had no choices when it came to fishing line. It was “catgut” or silk. If you saw it today, you might think it a primitive braid. It had poor knot strength and was high maintenance. At the end of the day, it was recommended that you lay it out to dry so it wouldn’t mildew and rot.

In 1938, DuPont invented nylon — the first synthetic fiber. A year later, it introduced Stren, an early nylon monofilament fishing line thin and limp enough to be used on fishing reels. Stren and the early monofilaments were a revelation. They were castable, appeared almost invisible and had excellent knot strength. As a result, mono ruled the fishing world for nearly 50 years.

That’s when a new generation of braided lines appeared. These “superlines” were stronger and thinner than earlier braids, quite a bit thinner than mono, and they cast well, too.

In the late ’90s, fluorocarbon was on the scene as a leader material. It was a bit too stiff for general casting purposes, and line twist and knot strength were issues, but fluorocarbon had about the same refractive qualities as water, so it was nearly invisible to the fish. And when some of its stiffness properties were remedied, it became a third option for anglers.

Three options. Three very different line types. But what should you use, when … and why? There isn’t always a “right” choice, but there’s always an informed choice, and when you make an informed choice, you can also make allowances or adjustments along with any compromises.

Let’s start with some basics about each line type. 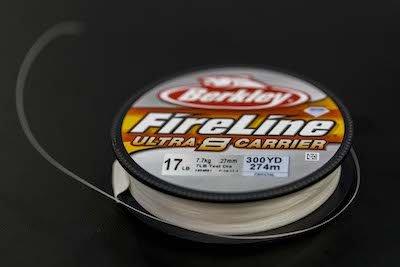 Berkley FireLine Ultra 8 is the latest generation fused braid. The “8” tells you it’s an 8-carrier line — eight strands of braid material woven and fused together. Most braids have between 4 and 8 strands. Fewer strands mean a thinner line. More strands mean a thicker, rounder line that often casts better because it’s smoother. 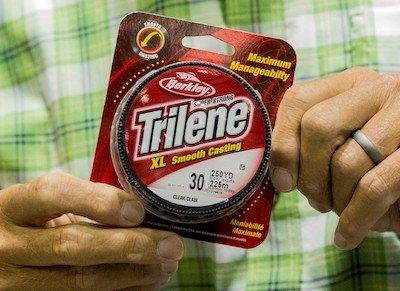 Monofilament is strong, but far less strong than braid for its diameter. It has significantly more stretch than either braid or fluoro. Because it floats and is translucent, it’s an excellent choice for fishing floating topwater lures. It is generally more castable than fluoro, but less castable than braid.

Berkley Trilene XL is a leader in the monofilament world. It has the best properties of mono and is extra-limp (XL) so it casts extremely well. The stretch inherent in mono makes it a viable choice for any baits with treble hooks. Trebles rarely get the kind of penetration that single hooks do, thus a little stretch can help to keep fish on the hook through steady pressure. Lines with less stretch are less “forgiving.”

Fluorocarbon is roughly as strong as mono for its diameter, but far less strong than braid. It has more stretch than braid and stretches differently than mono. As you pull mono, the line begins to stretch almost immediately; fluorocarbon only begins to stretch after a given load has been applied to it. Because it sinks, fluorocarbon is generally a poor choice for fishing floating topwater lures. It’s the least cast-friendly of the three, but because it has the same refractive qualities as water, it’s an excellent choice for clear water fishing conditions.

Berkley Trilene 100% Fluorocarbon is a breakthrough in this line type. It’s an extremely castable fluorocarbon and basically disappears in water. It may be fishing’s most versatile line. It’s a great choice for crankbaits, spinnerbaits, soft plastics and just about anything except floating topwaters.

Generally, lighter, thinner lines will impart more action to your lures, so going a little lighter can mean more bites. Heavier lines of any type give you more strength but may mute lure action. When fishing “dirty” water with less than a foot or two of visibility, there’s little reason to go “light” or to choose a less visible line like fluorocarbon or monofilament. 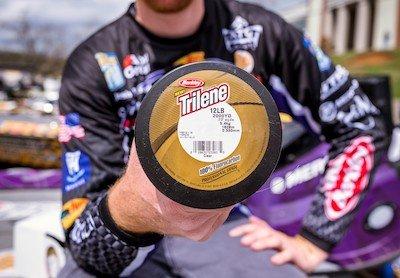 Got it? That’s a lot to take in; a lot to remember. But once you get it, you’re ready to make the kind of informed decisions that will improve your fishing.

We have wonderful fishing lines today — the best ever devised — but no one line can do everything. No line has all of the great qualities without any of the sacrifices.

The line you should choose depends on three primary factors: your lure or hook choice, the water clarity, and any cover or obstructions in the water you’re fishing. Armed with that information, you're ready to make an informed decision that will benefit your angling.